‘Ecology may be defined as the scientific study of the relationship of living organisms with each other and with their environment.’

·        Ecology not only deals with the study of the relationship of individual organisms with their environment,
·        The study of populations, communities, ecosystems, biomes, and biosphere as a whole. 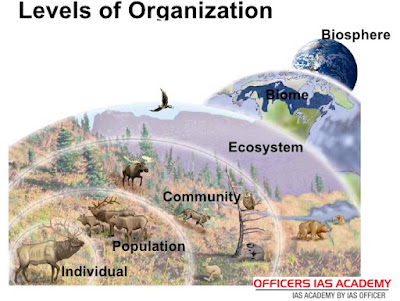 ·        (individual) basic unit of study.
·        Study of the form, physiology, behavior, distribution and adaptation of organism in relation to environment.

2. Population:
·        A group of organisms consisting of a number of different populations that live in defind area and interact with each other.
·        Study of interaction between populations and intra specific relationships.
·        ‘Population’ is defined as a group of freely interbreeding individuals of the same species present in a specific area at a given time.
·        For example, when we say that the population of a city is 50,000, we mean that there are 50,000 humans in that city.
·        However, all populations of humans living in any part of the world constitute the species Homo sapiens.

3. Community:
·        A group of organisms consisting of a number of different species that live in an area and interact with each other.
·        Study of structure and composition of community and inter specific interactions between members of community.

4. Ecosystem:
·        A communities of organisms and their physical environment, interacting as an ecological unit.
·        Study of the community in relation to the structure of its ecosystem-nutrients cycling, climate, energy flow etc. studied.

5. biome:
·        A large community unit, characterized by a major vegetation type and associated fauna, found in a specific climatic region is a biome
·        Biomes refer basically to terrestrial areas.
·        The aquatic systems like the seas, rivers etc. are also divided into distinct life zones on basis of salinity. 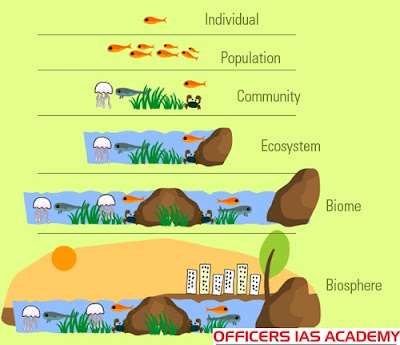 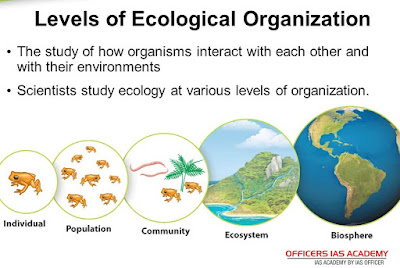 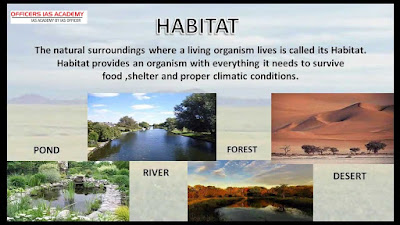 ·        Habitat is the physical environment in which an organism lives.
·        You would not expect an elephant in the ocean nor would you expect a whale in the forest?
·        The features of the habitat can be represented by its structural components namely
(1)space
(2) food
(3) water
(4) and cover or shelter .
Earth has four major habitats:
(1) Terrestrial
(2) Freshwater
(3) Estuarine (Where rivers meet the ocean) and
(4) Ocean.

·        In nature, many species occupy the same habitat but they perform different functions.
·        The functional characteristics of a species in its habitat is referred to as “niche” in that common habitat.
·        Habitat of a species is like its ‘address’ (i.e. where it lives) whereas niche can be thought of as its “profession” (i.e. activities and responses specific to the species).
The term niche means the sum of all the activities and relationships of a species by which it uses the resources in its habitat for its survival and reproduction.
·        A niche is unique for a species while many species share the habitat. No two species in a habitat can have the same niche.
·        This is because if two species occupy the same niche they will compete with one another until one is displaced.
·        For example, a large number of different species of insects may be pests of the same plant but they can co-exist as they feed on different parts of the same plant. 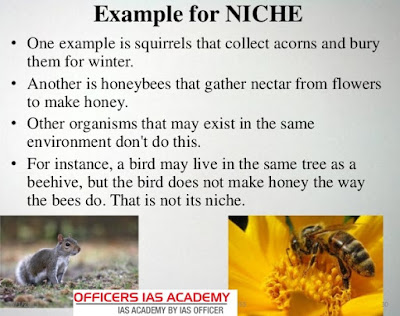 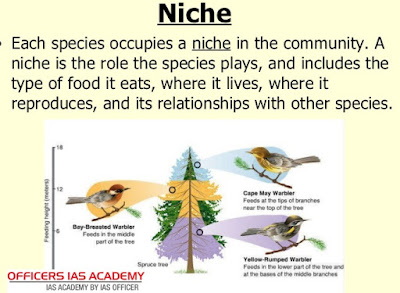 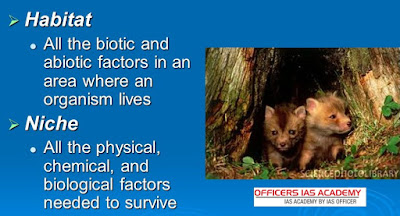 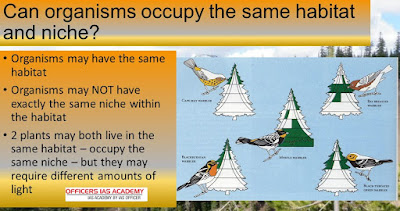 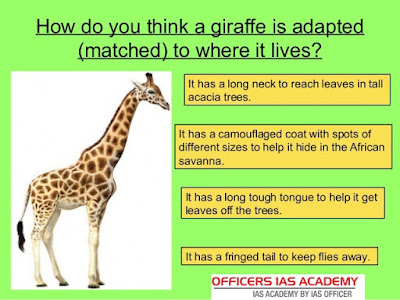 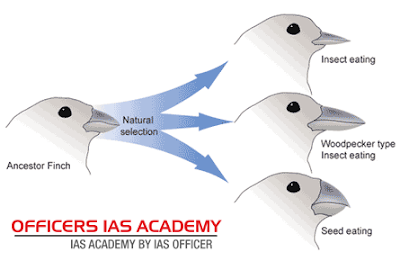 What is a Species :

·        However, species are generally composed of a number of distinct populations which freely interbreed even though they appear to be different in appearance.
·        Difference in colour of skin, type of hair; curly or straight, eye colour, blood type among different ethnic groups represent variation within human species.
·        Variations are produced as a result of chance mutation.
·        Competition and natural selection determines as to which variation will succeed and survive.
·        Those variations that enable a species to survive in the struggle for existence are encouraged and promoted. 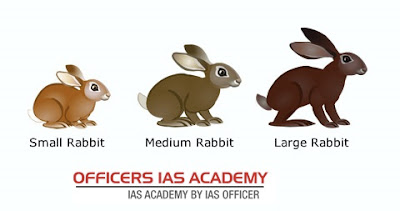 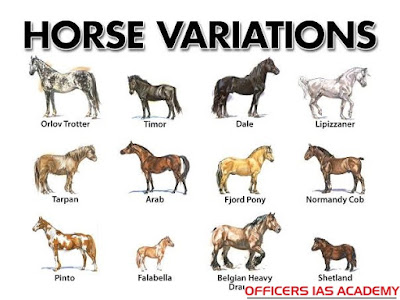 ·        A valid theory of evolution was propounded by Charles Darwin and Alfred Wallace in 1859.
·        This theory has been extended in the light of progress in genetics and is known as Neo-Darwinism. It has the following features:

1. Organisms tend to produce more off springs that can be supported by the environment.
2. Mutation (a change in genetic material that results from an error in replication of DNA) causes new genes to arise in a population. Further, in a sexually reproducing population, meiosis and fertilization produce new combination of genes every generation, which is termed recombination. Thus members of the same species show ‘variation’ and are not exactly identical. Variations are heritable.
3. An evolutionary force which Darwin termed natural selection, selects among variations i.e. genes that help the organism to adopt to its environment. Such genes are reproduced more in a population due to natural selection.
4. Those offspring which are suited to their immediate environment have a better chance of surviving, reaching reproductive age and passing on the suitable adaptations to their progeny.
5. Evolution thus results in adaptation and diversity of the species.

·        The number of species surviving in the world today is the outcome of two processes speciation and extinction.
·        Speciation is the process by which new species are formed and evolution is the mechanism by which speciation is brought about.

Extinction :
·        Ever since life evolved on earth, new species better suited or adapted to the environment have appeared and older less successful forms have died or become extinct.
·        Extinction is generally a natural occurrence. It means the dying out of a variety of or a species.
·        The primary reason for these extinctions is environmental change or biological competition.
·        Extinction occurs when species cannot evolve fast enough to cope with the changes taking place in their environment.

COMMUNITIES AND THEIR CHARACTERISTICS : 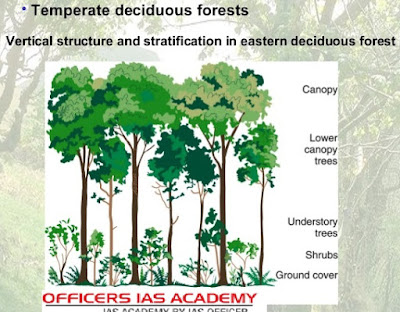 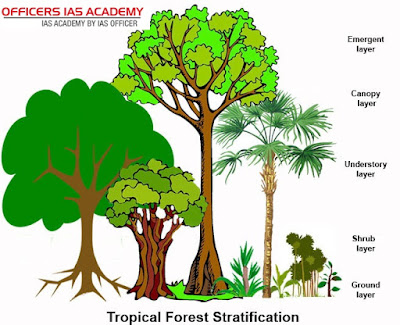 (i) Ground layer of mosses and liverworts
associated with dead leaves and other substances rich in organic matter.

(i) Herb or grass layer
,
The middle layer :

(v) Layer of canopy of lower tress and
(vi) Over storey or emergent tree layer formed by tall trees. 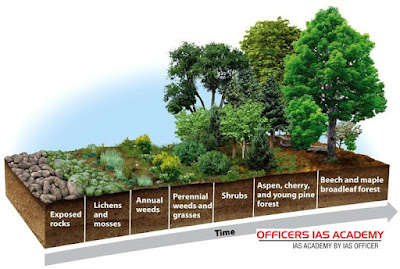 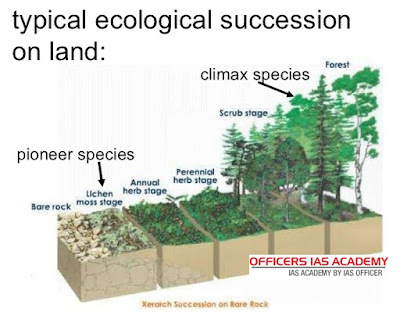 ·        Primary succession takes place an over a bare or unoccupied areas such as rocks outcrop, newly formed deltas and sand dunes, emerging volcano islands and lava flows as well as glacial moraines (muddy area exposed by a retreating glacier). where no community has existed previously.
·        The plants that invade first bare land, where soil is initially absent are called pioneer species.
·        The assemblage of pioneer plants is collectively called pioneer community.
·        A pioneer species generally show high growth rate but short life span.
·        Furthermore, primary succession takes a very long time as compared to secondary succession as the soil is to be formed during primary succession while secondary succession starts in an area where soil is already present. 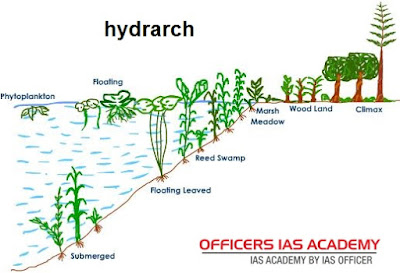 ·        Secondary succession is the development of a community which forms after the existing natural vegetation that constitutes a community is removed, disturbed or destroyed by a natural event like hurricane or forest fire or by human related events like tilling or harvesting land.
·        A secondary succession is relatively fast as, the soil has the necessary nutrients as well as a large pool of seeds and other dormant stages of organisms. 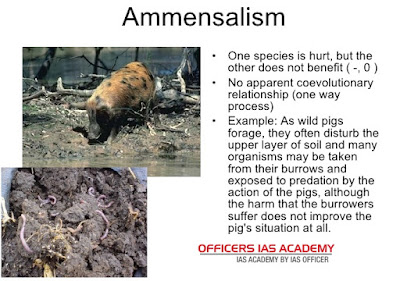 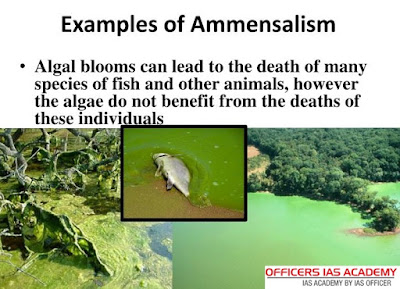 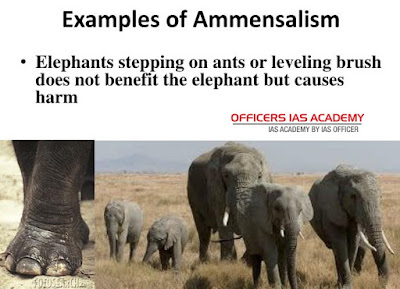 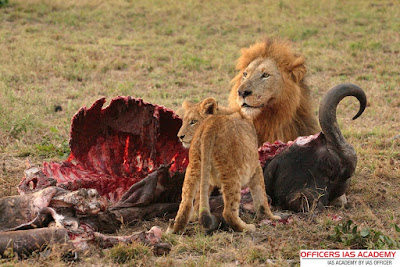 ·        In this type of interaction predator captures, kills and eats an animal of another species called the prey.
·        The predator naturally benefits from this relationship;
·        while the prey is harmed. Predators like leopards, tigers and cheetahs use speed, teeth and claws to hunt and kill their prey. 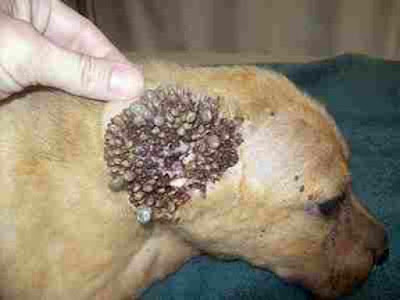 ·        In this type of interaction, one species is harmed and the other benefits.
·        Parasitism involves parasite usually a small size organism living in or on another living species called the host from which the parasite gets its nourishment and often shelter.
·        The parasite is benefited and the host is harmed.
·        Tap worm, round worm, malarial parasite, many bacteria, fungi, and viruses are common parasites of humans. 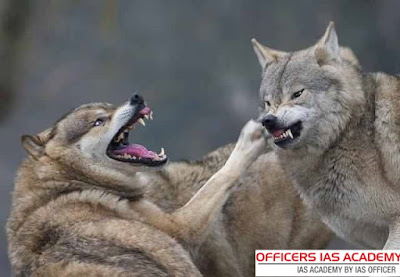 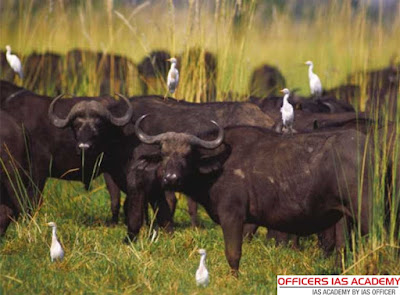 ·        In this relationship one of the species benefits while the other is
neither harmed nor benefited.
·        Some species obtain the benefit of shelter or transport from another species.
·        example of commensalisms is the relationship between trees and
epiphytic plants.
·        Epiphytes live on the surface of other plants like ferns, mosses and
orchids and use the surface of trees for support and for obtaining sunlight and moisture.
·        The tree gets no benefit from this relationship nor are they harmed. 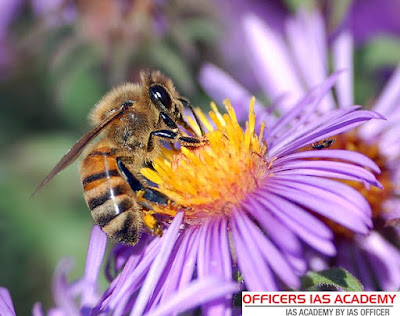 ·        This is a close association between two species in which both the species benefit.
·        some mutualisms are so intimate that the interacting species can no longer live without each other as they depend totally on each other to survive. Such close associationsare called symbiosis.
·        An example of such close mutualistic association is that of termite
and their intestinal flagellates.
·        Termites can eat wood but have no enzymes to digest it.
·        However, their intestine contains certain flagellate protists (protozoans) that have the necessary enzymes to digest the cellulose of the wood eaten by termites and convert it into sugar.
·        The flagellates use some of this sugar for their own metabolism while enough is left for the termite.
·        Both termite and flagellates cannot survive without each other.
·        Another familiar example of symbiosis is seen in pollination of flowers where flowering plants are cross pollinated by the bees which benefit by getting nectar from the plants and both cannot survive without the other. 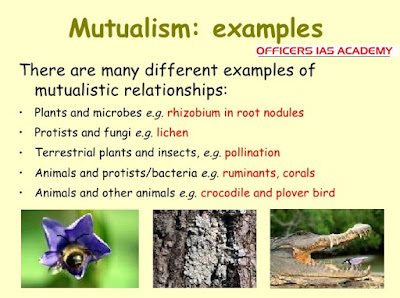 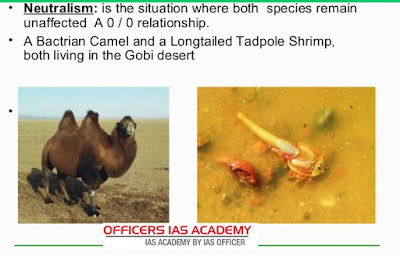 ·        Neutralism describes the relationship between two species which do
interact but do not affect each other.
·        It is to describe interactions where the fitness of one species has absolutely no effect what so ever on that of other.
·        True neutralism is extremely unlikely and impossible to prove.
·        When dealing with the complex networks of interactions presented by ecosystems, one can not assert positively that there is absolutely no competition between or benefit to either species.
·        Since true neutralism is rare or non-existent, its usage is often extended to situations where interaction are merely insignificant or neglible. 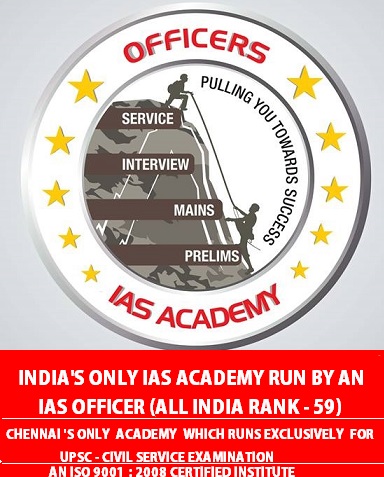